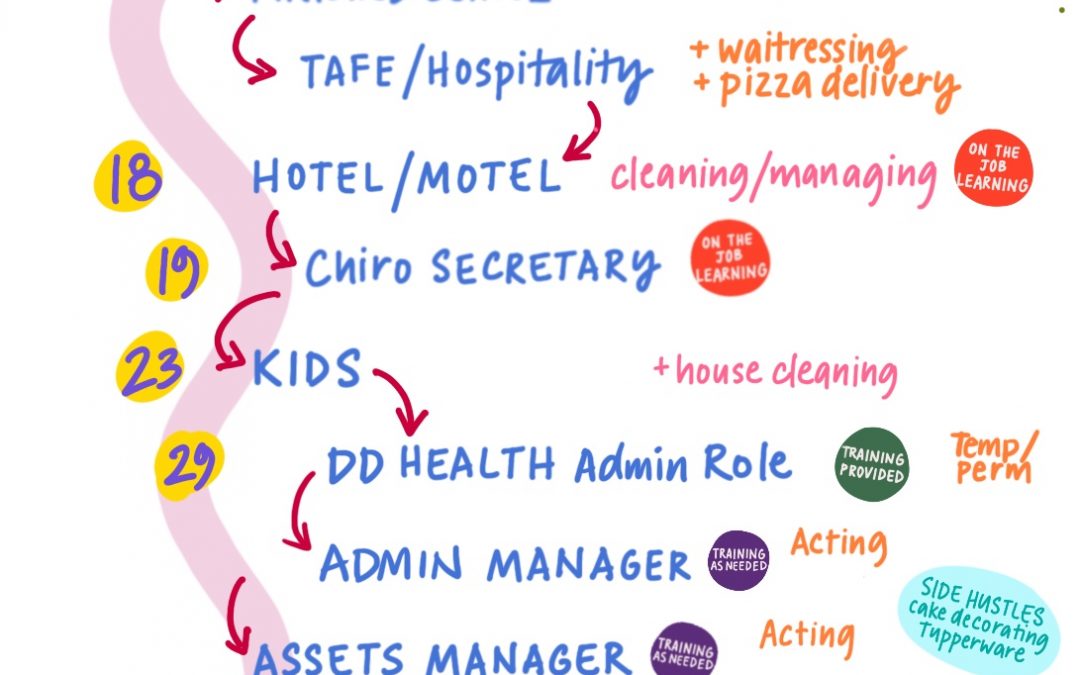 The Toowoomba Regional Jobs Committee is profiling locals who have reached milestones in their career via indirect and less obvious pathways. Through telling their stories, we hope to inspire people early in their own careers to explore different options and not be disheartened by setbacks.

Sue V from Darling Downs Health looked back on her career path from school to Senior Admin Officer and found there’s a recurring theme of willingness to learn, reliability, and adaptability in her career story.

“One of my first jobs while at high school was picking parsley. It only paid about $1 an hour and had very early starts! At about three o’clock in the morning, I would ride my pushbike out to the paddock to pick parsley or cucumbers.”

Sue’s best subjects in high school were home economics and maths, but her plans to be a Home Economics teacher were dashed when she narrowly missed getting a study scholarship. Disappointed and having no great aspirations, she enrolled in a hospitality course at TAFE. She was happy to be waitressing and delivering pizzas until she could work out what she really
wanted to do.

Often competing with lots of other applicants in the hospitality area, Sue was told she was chosen because her resume showed her willingness to do the horrible jobs – picking parsley!

At about 18, Sue moved to Brisbane – with no job lined up, no plans, nothing! She continued waitressing and took a hotel motel cleaning job which led to a weekend management role. Sue explained that she gained the management role “by showing that I could reliably turn up to work, be responsible, do the jobs allocated and by building trust with the managers.”

Jobs fell into place when Sue’s chiropractor invited her to join as a practice receptionist where she gained on-the-job skills in office administration. A whole new skill set developed through paper-based record keeping and face to face interactions with clients.

After taking a ten-year ‘family’ break, it was time to get back into the workforce.

Sue said the idea of applying for a Darling Downs Health job was very confronting because she had been out of the workforce for so long. “I felt I had lost my skill set and had only basic computer skills. It was a four-week fill in role and I very quickly worked out how much I didn’t know. It was a steep learning curve; it was just do your best and learn as you go.” Darling Downs Health provided on the job training to upskill their new people.

Sue progressed from a temporary Admin Officer Level 2 (AO2) to a permanent AO2 position. Managers look for a great work ethic when filling relief positions, so Sue was offered several acting short-term contracts at AO4 and AO5 levels such as District Assets Coordinator and Business Manager. Promoted to the permanent AO3 admin manager role in Community and Allied Health in 2003, Sue managed a team about 26 AO2 people. Ongoing performance appraisals offered the opportunity to identify extra training to support employees to move to the next step.

Sue’s role was later upgraded to an AO4 level. In 2013, Sue was offered the opportunity to relieve in the AO6 Consumer Feedback Manager role and was later successful in gaining this position permanently.

Sue reflects that she hadn’t ever thought of a career based in admin because she hadn’t done any secretarial subjects at school and still cannot type properly.

“I think everything I’ve done has built on itself to get me to where I’ve got to.”

Sue has this advice for someone wanting to join the Health Admin team:
● Apply.
● Give it a go, have the right attitude, have some basic skills behind you.
● Have a good resume that supports what you can do. If you don’t have a lot of work experience, then highlight some demonstrated skills based on your sporting club or volunteering in the community.
● Make sure there are no spelling etc errors in your resume.
● Show that you are willing to work and willing to learn.
● There’s no expectation in an AO2 position that you’re going to know everything. That’s what the training is for.
● You will not start at a top-level position – start building and demonstrating your skills to gain higher positions.