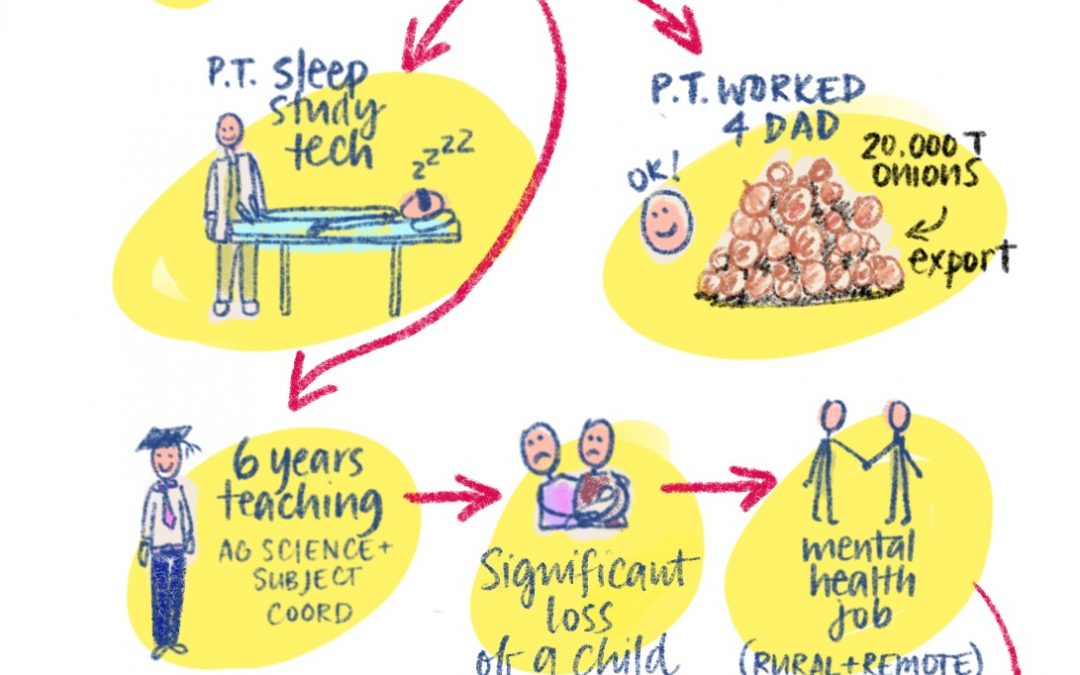 What do you get when you mix 20,000 tonnes of onions, teaching and an interest in mental health? Employ Toowoomba is delighted to bring you the Real Life Career Story of Tim Saal.

Sometimes, seemingly by accident, a career chooses a person rather than the other way around. This happened for Tim Saal.

Tim left boarding school in Toowoomba with sporting and leadership achievements, school holiday work experience on the land, and everyone’s expectation that he’d go to Uni in Brisbane. In fact, university seemed to be synonymous with school success. However, without sufficient marks to get into his first choices of Vet Studies, Physio or Occupational Therapy, Tim ended up doing an Applied Science degree and studying to be a Physical Education teacher.

“A lot of my work ethic came from growing up on a property … you just get in and get stuff done when you have to … boarding school also taught me an awful lot about life.”

While studying at Uni he held a variety of casual, part-time and full-time jobs in retail, hospitality and in export logistics. He developed his leadership skills in the world of hospitality by working his way up from “glassy” to manager.

“Uni lecturers hate me telling this story, but my greatest behaviour management experience and learnings came from working at the pub, not from any lecture.”

Working for his father in the exporting role, he was once tasked with filling a request for 20,000 tonnes of onions to be exported. This stretched his problem solving capabilities immensely and he spent a lot of time on the phone. That is a lot of onions!

“It’s important to be available and willing in these casual roles.”

Family contacts offered Tim a role as a sleep study technician which led to training others and promotion to assistant manager – all whilst still studying.

“I think that’s where my care for humans came from … I had the education thing, I had the hospitality (good fun, good time) and then I had the sleep technician role which made me think – OK I think I want to work in the caring and support and health side of things.”

His opportunity to use his education degree came up in Nanango, but as an Agricultural Science teacher and Subject Area Coordinator rather than in Phys Ed. His transferable skills from hospitality and other roles helped him stand out. He welcomed the opportunity and grew in the role for six years, learning more about Agricultural Science, whilst side hustles in agribusiness and mustering kept him busy outside of work.

Personal experience with grief, when Tim and his wife sadly lost their first baby, combined with supporting others through the impacts of sucide, developed his interest in rural and remote mental health. This led to an opportunity to work full time in the mental health area at a time when drought was a big issue in rural and remote communities. He was a little disillusioned with the education system at this stage, and because of his own experiences he disagreed with the continued push for University as the only goal and best pathway for all students.

Relationships that he had built and nurtured whilst teaching led to being offered a role of rural environmental advisory coordinator which then led to management roles. After a number of years he was able to combine his leadership, education and mental health support skills in his current role as Deputy Head – Industry Education – Western for AITC (Australian Industry Trade College). The AITC prides itself in empowering and enabling Year 10, 11 and 12 young people become: educated (complete Year 12 and obtain a QCE), employable (a School Based Apprenticeship or Traineeship which converts to full-time on the completion of Year 12) and great, mature young adults.

Continuously learning new things, hard work and being open to opportunities have been themes throughout Tim’s career. He worked hard to educate himself about mental illness and suicide prevention. He also participated in a number of advisory groups so he could learn from others working in that space. Tim still continues to be a master trainer in the suicide prevention course – Assist and Safe Talk.

Tim’s advice to people looking to start or change the direction of their careers is to get involved, keep learning, keep meeting new people and building relationships, work hard and keep your eyes open for new opportunities. University is one pathway but not the only pathway to a satisfying and rewarding career.